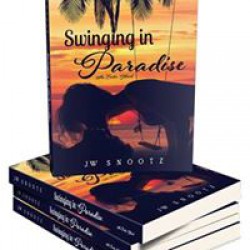 All things Taboo are ok here, our motto is Free Yourself, and join us. We like all types of books and nothing is off limits for us. Welcome.
0 BOOKS

Trailer for Swinging In Paradise.

Come join our street team, we have a blast, promote books, do all those things FB says you shouldn't do, and then smile about it. Free stuff, fun environment, great team, no strict rules and regulations. We are all about the fun, and of course winning sometimes too. XOXO

Come Get Wet With US!

What do you get when you drop eleven sexy friends in the middle of the ocean on a pristine private beach with a seemingly endless supply of cocktails? The Crew, as they lovingly refer to themselves, is about to find out. The group has grown close over the years, both in, and out of "the lifestyle." After six months of drudgery since their last outing together, they are more than ready for their next great sexual adventure--The island of Beora West.

After the initial buzz wears off, their curiosity gets the better of them and they set off to explore the island. What they find is nothing short of baffling, but there are some secrets even the untamed jungle around them can't hide. When one of them disappears, it becomes clear things are not what they seem. Who is behind the hidden agenda that brought them all to Beora West? What happened to their friend...and what dangers lie beyond the barricaded north shores?

What the Crew finds is more than they bargained for, but what they lose may be too much to endure.